A downloadable game for Windows, macOS, and Linux

Every now and then, there comes a program that somehow prevents reviews from being written in a hurry. Xavier Belanche has finally released his first personal game: Quirkaglitch. The story line is a weak as ever - some nonsense about the story of an unfinished game that was developed by himself when he was thirteen.

In late January 1986, coinciding with the birthday of my best friend I fell ill and eventually had to be admitted into the hospital. Fortunately I completely recovered. After two weeks in the hospital I returned home and went back to school. Everything was as I had left it. I was even surprised to find several drawings I had done while becoming ill in my desk drawer. I got back to normal, but I left the game unfinished. I'll never understand why I quit. Maybe I established an absurd relationship between the disease and the development of the game.

The aim is for the player to recover the original shape of his unfinished game through a ruined and glitched rooms of ancient 80's Speccy games. Weak it may be, still 'it's the game itself wot matters'.

I wondered if by chance I could locate the game on one of those old cassettes, would it correspond to what I imagined in my memory? If I found it I would be able to look at the source code I wrote in BASIC language and I could try to finish the game that I had given up on after my illness.

Several glitches appeared on the screen; the characters were distorted and sometimes unrecognizable and blinking like a fluorescent light that is going out. Then I discovered that the decay of time not only damaged my game but every game I remembered playing when I was a child.

Another clever little trick you discover, even before getting to indulge in the delights of the game, is the way the author has chosen to 'anti-pirate' his program. Using a vintage colour chart (well, googling a bit and easyly you'll find it), you have to set in a code of four colours which you access from the chart via coordinates displayed on-screen. Obviously it's not fool-proof, but it should slow 'em down a bit. Enter the right code and you're whisked from the title page to your first glimpse of 64-room map. That's you standing staring at a nothing but ten exits. The moral of the game is that virtually everything that is moving will kill you except some static objects. You've guessed it… the objects are the ones you have to pick up and combine them each other; there are a few of them in all and the majority are very difficult to find indeed.

One step out of The Padlock System Parable and you're thrust into the thick of the creator's memories - and what a place that must be! You can forget all about malevolent burded minecraft mobs and greedy yoga selfish puzzles, here the unlucky glitched creatures coming from the past…, and … need I go on?

Walking along that landscape of ruins made by glitches of ancient Speccy games I discovered the entrance to a passage that led me to a game that had been created by someone I knew. Matthew Smith disappeared after he decided to leave his game unfinished. Due the glitches it was difficult to the read the title of the game, but I recognized it as Matthew Smith's game by this inscription: “We must perform a Quirkaglitch". At that moment I knew I had arrived to the Domus Aurea of my childhood.

If you enjoyed The Ruins of Machi Itcza, then Quirkaglitch is going to seem like the proverbial manna from heaven. Xavier Belanche seems to have incorporated the best of his weirdness mind, let none of his apparent invisible fame spoil his wonderful sense of humour, and firmly set the blueprint for what I'm sure will be a very unsuccessful range of games. In the meantime, it's good to see a program that'll rattle the software houses a bit and get them thinking along less traditional lines for their future releases.

Thanks to Lyud and Rotter :) i couldn't beat the game!

Hope it helps you to finish the game

thanks but I couldn't do step 9.I finish step 8, so I have casette and pickaxe, and I touch the tape-player, the casette swap to tape-player and I couldn't touch casette again.

I don't understand which item is swapped next time. so I have pickaxe and tape-player. I start collect items again but  finally same wrong swap happened again.

So strange! Give me a time to remember how It was done (after fours years!) and I'll give you the right answer.

Reply
bupknar3 years ago
Yo, this looks interesting, but I have the same problem Doomstruck has in that the starting screen does not include any colored boxes to enter the code. It's a completely different screen altogether.
Reply
Xavier Belanche3 years ago

Hi! tell me which specs has your computer? hope I can help you

I have a Windows 10 computer with integrated Intel HD 4000 graphics. But I don't think this is the problem, the graphics are fine and smooth, it's just that the starting screen is the wrong screen... not the one you see in the YouTube video you linked but instead the same one as was posted by Doomstruck: http://puu.sh/m849a/d0ae94f685.png

Yep, isn't a graphics card issue... I think it's related to the screen size I guess. Can you give a try the Quirkaglitch for Windows 64-bit (screen height resolution < 768) :? binary?

Just one more reply, I got it to work by downloading the "screen height resolution < 768" version, this one actually starts on the correct screen! Just for reference my screen size is 1360x768 so that might be it. I just didn't see this version before because I was using the Itch app and it apparently doesn't show the multiple versions.

Also there seems to be a bug with the Itch app where (at least for me) the code booklet image doesn't show up in the game description page, which I think is really strange since the other images appear fine. So I'll file a bug on the Itch app for that I guess.

But at least it works now! So thank you!

Omg!!!! Thanks for your feedbacks! btw tell me if you need some tips to finish the game ;) 'cause I must confess it's really hard to solve it without any help of how interacting with the different objects of the game. On the other hand I'll fix the issue of the code booklet image :) so thanks again for your help!

so I looked at the video you included of someone playing, and I am in an entirely different area and there are no icons for me to run into so I can't start the game

Have you entered the code?

where would I enter the code? I've tried typing it out and pressing enter but that didn't work and I'm just stuck in this looping room with spikes and an enemy walking left and right.

are you playing with the mac version? I uploaded yesterday thinking I solved a screen issue but sure it doesn't work for you. Can you please upload a screenshot to see what happens? Thanks!

this is on windows and I'm stuck on this screen. I can move the guy around, but it's a useless effort since all sides of the screen loop to the opposite end

Sorry for the delay (busy days) After see your screenshot I figured out what happens. I uploaded a new file called Quirkaglitch-screen-debug Can you test it and check if it's working well for you? Thanks in advance.

I can't figure out how to Enter Code or something, but the game looks great

I like how this looks, but man that's a large file. Any way you could make it a bit smaller?

Thanks! The large file is due to soundtrack files (they're wav files (!)). I'll give a try as soon as possible to convert them to .ogg and see if it changes a bit the weight of the file

Done! it's much lighter now! 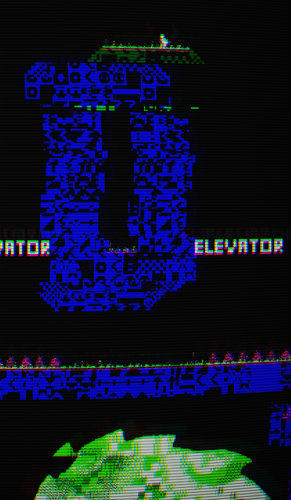 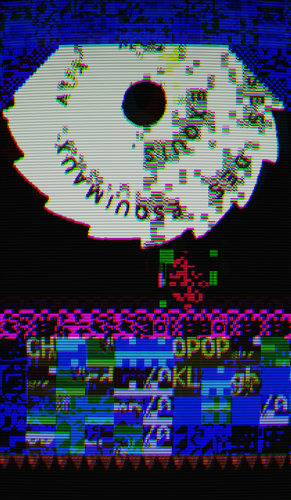 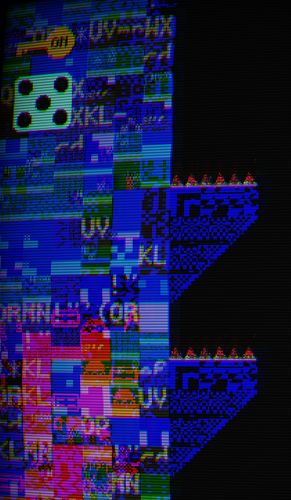